Wassily Kandinsky is widely credited as the pioneer of abstract art. A movement towards abstraction was presented early on in his career during his Blue Period (1911-1914) whereby during this time, his inclination to use colour independently of form and to incorporate musical terminology in order to identify his work, became commonplace. Kandinsky believed in the spirituality of colour, as a means in which to ‘feel’ an artwork rather than to simply ‘see’ it. He also associated different colours with different chords or notes on the piano, believing that combinations of colours, produced different vibrational frequencies. 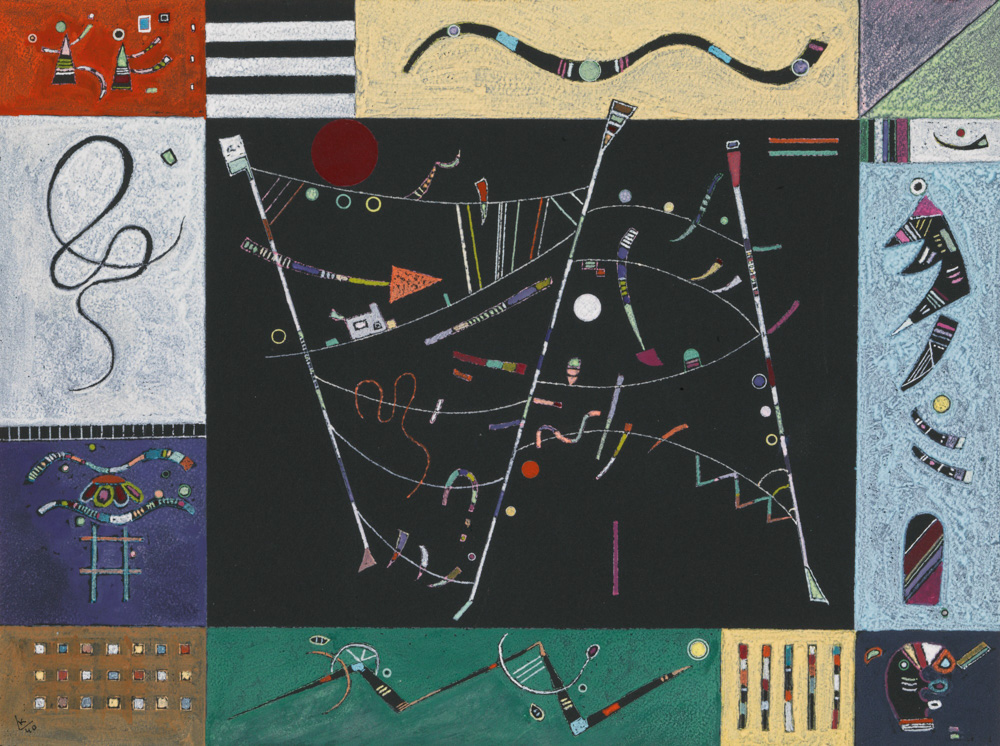 “Colour is the keyboard, the eyes are the hammers, the soul is the piano with many strings. The artist is the hand which plays, touching one key or another, to cause vibrations in the soul”.

It was during his time teaching at the Bauhaus (1922-1933) that  geometry became increasingly important in Kandinsky’s work and he began to examine the effect of the forces on straight lines. Shapes and forms such as the circle, half circle and angle predominated and he theorized that certain shapes represented different forms of consciousness or elicited different sentiments. The circle, for example, was considered the most peaceful shape, symbolizing the soul.

After moving to Paris in 1933, biomorphic forms began to take precedence, suggestive of microscopic organisms and organic matter. By employing a number of elements and textures, Kandinsky intended to create imagery that had an ability to resonate with the observers soul.

Kandinsky defined three types of paintings; ‘Impressions’, ‘Improvisations’ and ‘Compositions’. ‘Impressions’ were based on external reality, ‘improvisations’ depicted images related to the unconscious mind and ‘compositions’ allowed such imagery to materialize into a more structured, formal and comprehensive form. Kandinsky believed that an artist’s role was to lead others towards a more profound spiritual awareness but that they were most inclined to do so when they were truly authentic in their creativity- producing work out of an internal necessity. This inner necessity was for Kandinsky, the core principle of art: it was the artist’s right to unlimited freedom given that their work was founded on necessity. On this path, although an artist may only be understood only by a select few, their freedom to create and express would naturally enable new discoveries and these discoveries, once avantgarde, would become tomorrow’s reality. In turn, this empowered the artist to become a leader in new ways of experiencing and seeing the world.

Wassily Kandinsky studied at the Grekov Odessa Art School in Odessa (now Ukraine). He then studied law and economics at the University of Moscow. In 1896, he left his law career behind and  moved to Munich where he studied at the Academy of Fine Arts. He taught at the Bauhaus School of Art and Architecture, Weimar, Germany, between 1922-1933  and then moved to Paris where he lived until the end of his life.