Sculptor and painter Geoffrey Wickham’s oeuvre, embraces a spectrum of mediums and styles, including abstract constructions, works in clay, vivid paintings and minimalist ink drawings. Many of his portrait and figure compositions, as well as his landscapes, were inspired in Pembrokeshire, UK, where he often worked from a rundown shack. 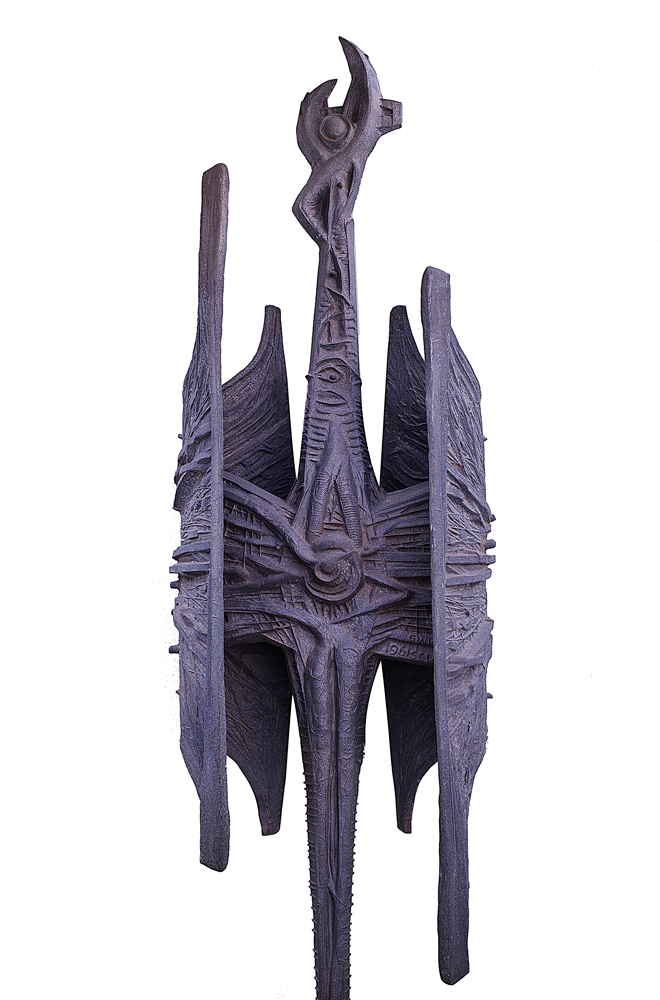 From the 1960’s onwards, Wickham was commissioned to produce sculptures for projects and buildings in the UK and abroad, working in collaboration with architects. Such works were formed using clay for bronze casting, heat-formed polystyrene for aluminium casting, as well as concrete and fiberglass.

Between 1982- 1986 Wickham lived in Kyoto, Japan, focusing on teaching as well as practicing painting, woodblock printing and sculpting. Such an experience played a pivotal role in his art thereafter, much of which consisted of expressive ink drawings, inherent of minimal brushstrokes. Wickham aptly adopted the Japanese nom de plum ‘Hajime’, meaning beginner and imprinted this as a seal onto the work that he produced.

Wickham studied at the Willesden School of Art before serving in the Second World War. During his time spent in service, he amassed a number of drawings of fellow soldiers as well as scenes of army life and landscapes from his time abroad. By 1949, a few years after leaving the service, he completed a Postgraduate course in Painting at the Royal College of Art (RCA). He taught Visual Studies in the School of Architecture, Regent Street Polytechnic (now Westminster University) and between 1960-1980, was a visiting lecturer at the RCA and the Architectural Association. Wickham was praised by many of his students for his encouragement and interdisciplinary approach to education.

In 1965, Wickham was elected to the Royal Society of British Sculptors (RBS) and by 1970, he began his tenure at the Sir John Cass School of Art, where he became head of the Fine Arts Department until his retirement in 1982.